While touring the PAX East exhibition floor, we had the pleasure of seeing two amazing games destined for much success: Limbo and Puzzle Quest 2. David labeled PQ2 a must buy that’s all but pre-ordered for his DS Lite, while I couldn’t stop gushing over Limbo, a simple black and white Xbox Live Arcade 2D platformer that deals in nothing but light, shadow and a pair of beady white eyes (pictured).

Trouble is, neither is on the Wii. It’s more of a shame with Puzzle Quest 2, I suppose, as the colorful visuals and pointer-based story mode, pictured below, were made for an IR pointer, not a joystick (as was the case in the Xbox 360 demo video). When David questioned the PQ2 rep, he pretty much shot down Wii support. Sad panda, but at least the series is making a return to the DS.

Limbo, on the other hand, would have a nice home on the 2D platformer-friendly WiiWare. When I talked with the producer, however, it seemed the title was locked up in “exclusive” land for now.

Buy a Wii, get a Mario game and the wrong soundtrack 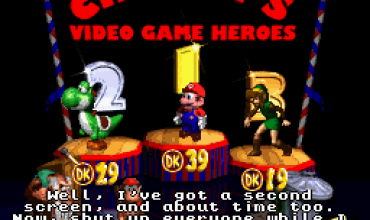