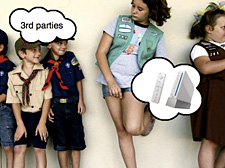 Industry analysis and corporate hyperbole aside, there is something to be said for logic.

Nothing deductive or philosophical, either. Just simple, basic logic. The kind of stuff kids learn between finger-painting and cookie breaks in first grade. Logic as it operates in the minds of seven-year-old boys; back then, we werenâ€™t exactly sure what impact â€œcootiesâ€ would have on our health and well-being, but our instincts told us – animalistic survival tactics, perhaps? – they were something to be avoided.

Cooties are bad. Girls carry cooties. Therefore, girls are stupid, gross and to be avoided at all costs.

I suppose one could even call it common-sensical. It just makes sense, and it would stand to reason that similar logic should be at work when major third-party video game publishers decide which platform to support with their best development teams. They watch as Nintendoâ€™s Wii outsells both Microsoftâ€™s Xbox 360 and Sonyâ€™s PlayStation 3 on a monthly basis, and as logic provides, they put their most capable teams on quality Wii software to make a profit, develop and sustain consumer loyalty and, ultimately, develop a healthy portfolio for the marketâ€™s hottest platform.

As devout Wii gamers have noticed, unfortunately, this seemingly logical conclusion dwells somewhere between idealism and naivetÃ©, far from the reality of third-party Wii development. Given the simplicity of the reasoning we have explored, it is not an entirely defective theory to conclude some of the industryâ€™s biggest third-party publishers are taking an illogical approach to Wii development.

And therefore, we can logically deduce, love cooties.

Of course, to make such a sweeping, all-encompassing statement of disdain isn’t entirely fair. To assert that third-parties across the board are giving lackluster efforts on Wii development would not only suggest ignorance, but also absolute inaccuracy.

Konami’s irresistible, quirky Elebits; Atlus’ acclaimed Trauma Center series, which has blossomed into an exclusive Wii franchise; Sierra’s infectious shooter, Geometry Wars: Galaxies; Ubisoft’s No More Heroes, an avant-garde masterpiece; Capcom’s infinitely charming Zack & Wiki; games such as these have proven that a focused third-party development team can squeeze remarkable results from Wii’s modest, under-powered hardware. They also demonstrate third-party competency to stubborn fanboys so eager to decry the merit of any game conceived by a company other than Nintendo.

To their credit, third-parties have published some of the most unique, refreshing and enjoyable titles in the Wii library, in some cases pushing the console’s “revolutionary” philosophy even further than Nintendo.

But those cases are isolated. The long and painful lapses between third-party Wii triumphs are filled by low-budget shovelware and second-thought PS2 ports as publishers take an increasingly secondary approach to Wii software. They put their biggest and best teams on the 360 and PS3, consoles with smaller markets, to work on their best, most ambitious titles. In the meantime, they task less experienced, perhaps less capable studios to appease the growing Wii consumer base with software so mundane that it is insulting, so uninspired that it begs the question, “Why even bother?”

Nintendo’s own Shigeru Miyamoto noticed this unfortunate trend early, and he addressed it in a Mar. 2007 interview with Newsweek’s N’Gai Croal with a now somewhat infamous quote:

“If there’s only one piece of advice that I could give to the managers of third party companies, it would be that a lot of times it seems that when they’re putting games out on Nintendo hardware, those games are being developed by their third-string team or their fourth-string team. Maybe that’s because they see those products as being unique projects or somewhat smaller-scale projects. But when Nintendo puts out a title that is designed to really support and sell its hardware, that title is always developed by one of our number one teams. And so I think that when it comes to the question of trying to compete with our software, I would really like to see them try to do that with their number one teams rather than with the third- or fourth-string teams.”

Almost a year later, his quote is still relevant, applicable to a third-party situation that has simply not changed.

Consider Activision’s Guitar Hero 3: Legends of Rock, which released last October. The 360 and PS3 versions were developed by Neversoft Entertainment. The Wii version was dealt to Vicarious Visions and, as reported by Blake long before others, shipped without stereo sound.

Sierra set my world afire when it announced it would be releasing a new Ghostbusters game in late 2008. Gorgeous screens depicting realistic proton-beams and an ooze-coated Slimer circulated around the Web and caused immediate excitement among anxious gamers, Wii owners included. Then they received the news that their version would be a cartoon-like venture focused mostly on multiplayer. 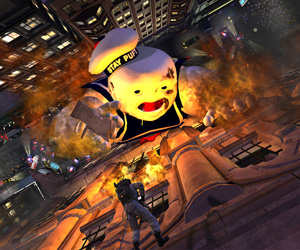 My pleas to Sierra and Red Fly Studios, the developer handling Wii and, of course, PS2 Ghostbusters development, were quickly responded to with assurances that the Wii version is a priority, not an afterthought. But given the history of tandem Wii/PS2 development, shouldn’t Wii owners be skeptical?

Take LucasArts, which plans to release an ambitious new Star Wars title, The Force Unleashed, later this year. LucasArts is developing the 360 and PS3 versions in-house. The Wii version, however, has been outsourced to Australia where Krome Studios, which boasts a resume highlighted by Ty the Tasmanian Tiger, is handling development.

Give me a kangaroo with boxing gloves over a polished, gorgeous, physics-rich gaming experience any day.

Namco-Bandai chose to develop Soulcalibur IV, the newest entry in its popular fighting franchise, for 360 and PS3. Last November, the company released Soulcalibur Legends for Wii, an extraordinarily bland action game spin-off that should have never off-spun.

In some ways, the gross negligence prevalent in most current third-party Wii development is unprecedented. During generations past, the console with the greatest market share has generally enjoyed tremendous third-party support, both in terms of quantity and quality of games. So why should Wii be any different? Why are third-party publishers assigning secondary teams to Wii software? Why are they dropping mere crumbs before Wii owners, virtually turning their back on the largest and fastest growing console market?

The typical arguments have been made consistently and will likely be repeated further; the Wii can’t handle this engine, those physics, that lighting, or these online components. Wii games simply cannot look good, as if gamers imagined Super Mario Galaxy and Metroid Prime 3. And of course, third-parties cannot sell software to a Nintendo audience, as if worldwide million-sellers like Resident Evil 4: Wii Edition, Red Steel and Guitar Hero III made up their own figures.

These tired arguments are getting as stale as old Raisin Bran and every bit as worthless. Yes, third-parties face obstacles in selling software to the Nintendo audience. But they are not insurmountable by any means. To complain or conquer, that is the question.

For third-parties to ignore Wii would be one thing, but for some of them to consider it an unworthy subordinate, to infest it with half-baked, half-broken software and to create justification by preaching its weaknesses is simply to ignore its strengths. To focus without distraction on every reason not to put a capable team on Wii is to simply ignore logic.

And graphics and processing power aside, there is still something to be said for logic.

(Author’s note: Representatives from Ubisoft, LucasArts and Sierra were contacted for comment and/or information on this topic. Only Sierra responded, but did not comment in time for publishing.)

Wii outsells the mighty PS2 for the same period