Since the Nintendo Switch was codenamed project “NX”, many of the Infendo crew have been screaming from our rooftop parties for a port of Overwatch to Nintendo’s hybrid console. …Ok, maybe it was only me that was screaming, but I was screaming really loud.

First Person Shooter With a Twist

One of the main draws of Overwatch is that the game is a first person shooter at heart, but wins and losses are not solely determined by your kill to death ratio. Overwatch was not first game to follow this model, nor has it been the last, but for my money, Overwatch has been the game to hold my interest the longest.

In preparation for the Nintendo Switch version, the ol’ Xbox One has been getting quite the workout. It had been months since last booting up the team shooter, but like riding a bike, after a few rounds I was ice walling with the best of them.

There has been a lot of controversy surrounding Blizzard in the last couple of months leading up to the release of Overwatch for the Nintendo Switch, and has many gamers questioning whether to opt out of purchasing the game out of principle. Others have criticized the Nintendo Switch as being unable to handle the game. While this post will not cover the former subject (listen in to Infendo Radio next week to hear my thoughts on this), after a few hours with the game I would refute the latter.

My main time with the game has been in handheld mode, but playing docked on the television has been fine as well. The framerate not being at 60 FPS has not really affected my enjoyability as others online have stated. The ability to play anywhere in the house in handheld mode and the awesome gyro controls have outweighed any complaints from me.

The one failing of Overwatch on the Nintendo Switch would be that progress from other versions of the game do not transfer over, meaning starting with none of your special outfits and emotes gained from other versions of the game. This was probably a conscientious decision, as the game supports no cross play, and it would have been strange starting at level 40 with max gear matchmaking with other players who have never played the game.

Overall, my first impressions of Overwatch for the Nintendo Switch are quite high. If you want to hear more, tune into Infendo Radio for further impressions of the game!

Chrom Gets Promoted From Final Smash To Full-Blown Character 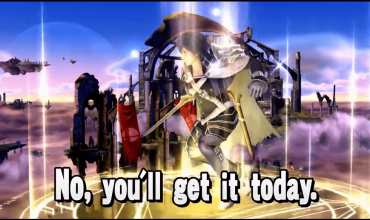