I’m sure you guys are eagerly anticipating this top 10 list, and just like the previous year before we decided to get together and decide which DS game could be crowned the best game of 2008.

We tried various ways to figure out which one would be the top contender. Colosseum fights, poetry writing, archery, and a cook off reminiscent of iron chef, but being inanimate cartridges that they are… they just flopped still on the arena floor.

So that left us with our last option, a nice and peaceful democratic vote on who would reign supreme. This is the final list we came up with, so without further adieu… THE TOP 10 DS GAMES OF 2008!

Trauma Center follows the exploits of Derick Styles whose name is a play on DS (good writing). Derick happens to be a member of a special medical organization, Caduceus. Caduceus being one of the top medical organizations in the (game) world, which he happens to be a part of because of his special power. People refer to this power as the “healing touch” which is like a satanic prayer over a patients body that slows down time. However, the game isn’t just about the healing touch so much as it is about injecting stabilizers into your patients as you blunder about in their open bodies trying to stop their toxicosis.

Why it made the list: Trauma Center: Under the Knife 2 made the list due to it’s improvements over the previous Trauma center game as for the fact that it is a lot more forgiving then the previous iteration of the game. It also goes further to improve upon the style and story of the previous game.

Final Fantasy IV originated the “Emo” protagonist storyline in the Final Fantasy series. You play a Dark Knight (not batman) who is torn between the interests of his King and his own feelings about the war his King wants to wage. This game could be compared to a Greek tragedy just for the fact that every turn in the game you can expect “something” bad to happen. However, the game also teaches the moral of perseverance and to believe in yourself.

Why it made the list: With an amazing fully voice acted cast, and various in game cinematics that could rival that of the PSP. Final Fantasy IV is a game that gives you that hard core RPG storyline with a perfect mixture of difficulty and replayability.

Apollo Justice is the successor to the highly praised Phoenix Wright series. Not only does it continue the storyline of Phoenix, it also reveals of what became of many of the other games characters. As it would imply, you play Apollo Justice a young lawyer who ended up hitting the ground running. As his first case is about a murder which involves none only but Phoenix Wright.

Why it made the list: Magic lawyerin’ panties, nuff said.

Nothing is more fun then a pink little soft ball of awesome, and I’m not talking about some type of Japanese candy, I’m talking about Kirby. Kirby Super Star Ultra is actually about three different games mixed into one, with a bunch of added mini games to play with. Although each game is kind of short and doesn’t have much story, they all have their own very unique and awesome mini stories that when put together make a good game none the less.

Why it made the list: Although being a port of a SNES game, Kirby super star ultra proves that even slight updates to old classics can still be amazing. However, what we do need is a lot more kirby, and a lot less bad ports.

Time Hollow follows the exploits of what seems to be a normal high school teenager named Ethan, whose birthday is on the horizon. The game starts out normally as you are eating dinner with your family talking about various things until Ethan brings up how he wants a fancy watch. Cause we all know time traveling without a watch is suicide. Anyway, later that night a lot of events change and his parents go missing. Ethan soon finds a glowing E.T. like pen and uses it to change the past and the future to try and save his parents.

Why it made the list: Any game that has a quantum leap aspect to it is always welcomed in my home. However, Time Hollow fills our dream of one day going back in time and stopping some Nintendo related things from happening. Here’s looking at you Virtual boy.

Space Invaders Extreme combines the captivating essence of the original game with a stunning alliance of futuristic graphic design and awesome sounding audio. The gameplay experience has been developed to maximize on the consoles’ abilities, offering players a whole new range of amazing features including a vast array of new power-ups. Of course you can dump all the power ups you want but if you fight a giant space invader watch out, you game over is approaching.

Why it made the list: Who doesn’t love some old school space invader action. Just remember a tactician shoots threw one of his own barriers, a mad man does it through all of them.

Advance Wars: Days of Ruin was the first step into trite game design, with it’s post apocalyptic story, and a somewhat amnesiac main character. However, we can forgive it for that because of its interesting story and character development that is always present in the series. Especially with it’s more mature theme and poppin’ rock music. Still it’s one of the best Advance Wars games out there, I just wonder how long it’ll take before they’ll drop the “Advance” title from its name.

Why it made the list: With a great level creator for online Wifi matches, and a level rating system that makes you want to perfect each match. You can get a lot of mileage out of this one, and you can always expect something new and exciting on Wifi.

We honestly couldn’t decide which of the following games were better so it ended up a tie for the third spot on our top 10 list.

Castlevania Order of Ecclessia is the third game in the DS Castlevania series, while not actually being a continuation of the Belmont, or Soma Cruz story lines. It is it’s own unique game that delves into the world of Castlevania. Set up more like Simons Quest for the NES you control a character named Shanoa with an unique spiritual ability to absorb demonic glyphs and use them as her power (kind of like Aria of Sorrow/Dawn of Souls).

Why it made the list: Castlevania games have always had a high standard of fluid 2D animations mixed in with slight 3D graphics. As well as always featuring a fantastic soundtrack that captures the feeling of each individual area.

Chrono Trigger is an old school Super Nintendo game that is considered not only one of the best RPGs on the system but set up a trend of games having multiple endings. This all depends on what you do in the game and when you actually beat it. Giving this game a reason to be played over and over again. The best part of this game is probably the range of characters that you can recruit in your party, as they are all from different time periods and have their own distinctive personality as well as dialogue.

Why it made the list: While this game has captured the no. 1 spot on the DS Metacritic list since it was released, it’s hard to say when it’s going to drop from that spot. This game is fantastic and should be a part of anyone’s collection.

2. Professor Layton and the Curious Village

So you think you’re pretty good at solving puzzles and riddles? Then Professor Layton and the Curious Village is the game for you. Not only is this game supposed to be part of a trilogy of amazing stories pertaining to the adventure Luke and Hershel Layton, but an animated film as of late. However, the real charm of the game is its animation style, and the voice acting between various characters.

Why it made the list: The game offers an world of well thought out characters and over a 100 hundred different puzzles to play around with. As well as a mixture of animation and voice acting, it’s hard not to love this game. Also, lets not forget that it also has the ability to download extra puzzles with Wifi. Although they stopped updating the puzzles, there is still more fun to have if you go online.

1. The World Ends With You

Although I never thought that this game would be released outside of Japan, it was amazing to see that it was. The World Ends with You did break new ground in game design, allowing you to play with two different characters on two different screens. Effectively forcing you to learn how to multitask efficiently. Surprisingly the game is centered around a real area in Japan, Shibuya Station, and involves a race against time to meet goals while defeating “Noise” demons that normal people who aren’t playing “the game” can’t see. The game also relies heavily on it’s music and has one of the best soundtracks a DS game has ever seen. A must have for RPG fans.

Why it made the list: How could it not make the list, not only did this game show that the 2D genre could still be used to produce games, there is still game play elements yet to be explored with 2D.

Derek names top ten Donkey Kong games ever made, gets help from ape himself

Death of the fanman: How Nintendo lost one of its most avid evangelists

The Once (and Future) King 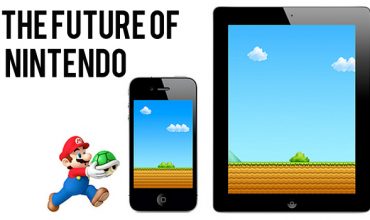