Is this really a surprise? Super Smash Bros. Brawl was selling at a clip of 120 units per minute last week, and today eclipsed the Nintendo of America internal record for fastest selling title in its history.

The back-patting press release is below.

REDMOND, Wash., March 17 /PRNewswire/ — After just one week on store
shelves, Super Smash Bros.(R) Brawl for Wii has become the fastest-selling
video game in Nintendo of America’s history. Since its launch on March 9, the
feature-packed fighting action game has sold more than 1.4 million units in
the United States, including more than 874,000 on March 9 alone. It has sold
at a rate of more than 120 units per minute between launch and March 16.
(Logos: http://www.newscom.com/cgi-bin/prnh/20080116/LAW110LOGO-b
http://www.newscom.com/cgi-bin/prnh/20061011/LAW104LOGO)
“Super Smash Bros. Brawl has made the leap from video game to cultural
phenomenon,” said Cammie Dunaway, Nintendo of America’s executive vice
president of Sales & Marketing. “Game reviewers and the public alike praise
its fun game play and extensive, inventive content.”
Super Smash Bros. Brawl features a nearly limitless variety of options for
players. Dozens of classic Nintendo characters like Mario(TM) and Pikachu(R)
are joined by industry icons like Sonic The Hedgehog(TM) and Metal Gear’s
Solid Snake for all-out four-player battles. The endless customization keeps
players coming back for more. The previous game in the series, Super Smash
Bros.(R) Melee, became the best-selling Nintendo GameCube(TM) game of all time
with more than 7 million copies sold worldwide, so it’s no surprise to see
this latest installment racking up record numbers.
“It’s important to remember,” Dunaway said, “that we have lots more fun on
the way: Upcoming titles like Mario Kart(R) Wii and Wii Fit(TM) will keep our
momentum going strong.”
Mario Kart Wii launches April 27 with the Wii Wheel(TM), which lets
players drive their speedy karts with the intuitive feel of a wireless
steering wheel. It’s another “bridge” game like Wii Sports(TM) that lets video
game novices and veterans play and have fun together. Wii Fit arrives May 19
with the Wii Balance Board(TM) to combine fun and fitness. It lets users track
their progress over time, and it’s an easy way for every member of the family
to keep active and play together.

Is Nintendo’s Future in eSports? 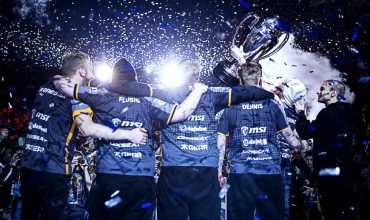