Nintendo found themselves in an interesting position after the turn of the millennium. Never before had they failed to be market leader in the console space, but the race between the Nintendo 64 and the Sony Playstation wasn’t even close. While Nintendo managed to sell a respectable 32.93 million consoles, Sony would sell 102.49 million of their Playstation.

With two horses in the grand video game race, Nintendo was able to sustain itself and remain in incredibly profitable. Nintendo’s most profitable year on record was in 1993 in which the made $1.25 billion during the SNES lifecycle. In 1998 during the N64 era, Nintendo was able to amass $1.2 billion in profits, nearly matching their previous record.

Nintendo would begin development of their next console in 1998. Internally the console would go by the code name of N2000.  Nintendo would partner with a hardware design company by the name of ArtX for the complete design of the system logic and of the graphics processor. Although ArtX was only launched in 1997, Nintendo already had a working relationship with leaders of the company as ArtX was composed of former SGI engineers. As SGI had previously designed the graphics hardware of the Nintendo 64, Nintendo felt confident in the abilities of the newly formed company. In April 2000, Artx would be purchased by ATI, shortly before the launch of the console.

At a pre-E3 press conference in 1999, Nintendo announce the the console as Project Dolphin. Howard Lincoln speaking on behalf of Nintendo famously said of Art X, “This Company is headed up by Dr. Dr. Wei Yen, the man who was primarily responsible for the N64 graphics chip. Dr. Yen has assembled at ArtX one of the best teams of 3D graphics engineers on the planet.”

Rare would continue to develop games for Nintendo, but only for Nintendo’s handhelds.  For example, a port of Donkey Kong Country was released for the GBA in 2003 and Viva Piñata: Pocket Paradise was released in 2008 for the Nintendo DS.

Out of the ashes of the loss of longtime partner Rare, Nintendo would form an equaling important one in Retro Studios. Founded in October 1998 as an alliance between Nintendo and former Iguana Entertainment founder Jeff Spangenberg, Retro Studios began with a staff of 4 in 1998. By the year 2000, the studio would grow to over 200 employees, many of which were former Iguana staff.

Retro would originally began development on several titles for the GameCube, but only one game with the working title of Action-Adventure was retained. In 2000 Shigeru Miyamoto would visit the studio, becoming quite upset with most of the title being developed. He was however impressed with the aforementioned game with the working title Action-Adventure, and suggested that the game be developed using the Metroid licence.

Nintendo would give Retro permission to use the Metroid license shortly before the 2000 Space World. Retro would eventually cancel the development of their other games to focus solely on Metroid Prime. On May 2, 2002, Nintendo purchased $1 million in Retro Studios stock, and the studio became a first party developer and a division of Nintendo.

The GameCube would fail to recapture video game dominance for Nintendo, taking last place among the three home consoles of the generation. The race between the Microsoft’s Xbox (24 million units) and the GameCube (22 million units) was a close one, with Microsoft only outclassing Nintendo by a mere 2 million consoles. Sony however far outclassed its competitors, as the Playstation 2 was able to achieve a record breaking 153.6 million systems.

Nintendo still managed to remain profitable throughout the life a the GameCube, largely on the back of aggressive price drops and attractive game bundles. At this point many would count Nintendo out, but as they have proven time and time again, that would be unwise. Nintendo would soon take the world by storm, and everyone would laugh the first time they heard someone say they were playing with their Wii.

Join us tomorrow as we continue to chronicle Nintendo’s video game history as we cover the outstanding Nintendo DS. 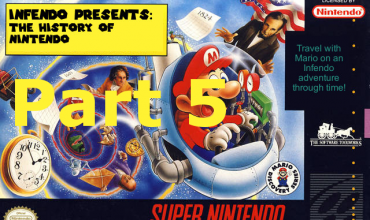