So…are many of you currently enjoying one of the best games Nintendo’s ever released? (And, no, I’m not talking about 1st Class Poker and Blackjack).

Kid Icarus Uprising has been surprising me in a lot of great ways this weekend, and I have to eat some crow regarding my past negative comments regarding the free included stand.

It works, it’s well designed, and it aids the gameplay without being intrusive. It’s also great for watching Netflix. I still cling to my notion that — in a perfect world — games should control well on the device they’re designed for *without* external aid. KIU is so much fun, however, that the issue becomes pretty insignificant. I’m now grouping the 3DS stand in the same category as the N64 Rumble Pak: it’s a free, optional accessory that greatly enhances gameplay.

It works fine as a tabletop stand, but it’s also great propped on its front edge on one’s stomach while reclining. I appreciate the opening for the headphone jack.

What do you think? Should Nintendo have rethought the control scheme for KIU, or is the stand a solid, smart solution that allowed the game’s creator, Masahiro Sakurai, to stick to his original vision for the project?

Knowing Tekken will include a 3D feature film, are you more likely to buy? 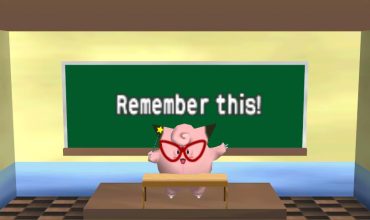