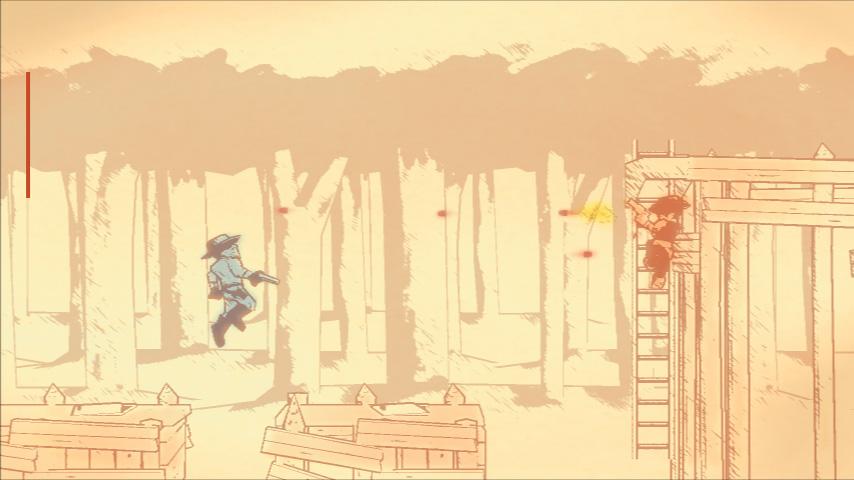 Developed by Bertil Horberg, with music by Arne Horberg, Gunman Clive is a simplistic platformer available for download on the Nintendo 3DS eShop (and the Apple App Store, among others) for just $1.99.

Though there isn’t anything groundbreaking about Gunman Clive, it is a lot of fun to play. The player assumes the role of, you guessed it, Gunman Clive (or two other possible choices) in his bid to rescue the mayor’s daughter and restore peace to the west. He is equipped only with the ability to jump, climb ladders, and shoot his gun. Clive can pick up a variety of upgrades to power-up his weapon with a scatter shot, a homing shot, and more. The game’s controls are solid, making it fun to traverse the well-designed levels and fight the clever boss battles scattered within them.

The art in Gunman Clive has a unique, sketch-like quality that is a treat to behold. The simplicity of the game’s visuals ensure that the gameplay is always sharp and precise, which is, of course, vital in any platformer. Additionally, the game’s soundtrack is charming and catchy.

Gunman Clive will only provide about an hour, maybe more, of gameplay time, with three difficulty modes and three unique characters to play as. But it is polished to a sheen in every aspect, from gameplay to graphics, so the $1.99 price tag for it is hard to argue against. I would score this game with:

E3 predictions inbound. Here is what I think Nintendo will talk about in one weeks time.