Nintendo has posted the transcription of another session of “Iwata Asks”, the ongoing roundtable discussions featuring Shigeru Miyamoto, Shigesato Itoi, and Satoru Iwata. You can read through the whole interview here, but we’ve also collected a few juicy excerpts from the discussion here for your ravenous consumption.

Iwata: For example, a sample screen used in the Nintendo 3DS to illustrate how you can see three-dimensional images without special glasses was functioning on the Game Boy Advance SP system.

Iwata: Yes, thatâ€™s right. Making three-dimensional images that can be seen by the naked eye requires a special liquid crystal, so we tested it out by putting it in the Game Boy Advance SP. But the resolution of LCD was low then, so it didnâ€™t look that great and it never made it to being a product.


Miyamoto: I suppose so. To go way back, I even made a 3D Famicom game on disk that you played wearing goggles. We made that with you, Iwata-san.
Iwata: Right, right! (laughs) The first work Miyamoto-san and I did together was a racing game for the Family Computer Disk System that you played wearing goggles.
Itoi: Oh, really?!
Iwata: A game called Famicom Grand Prix II: 3D Hot Rally.
Iwata: If it hadnâ€™t been for the failure of the Virtual Boy system, so many of our people might not have said, â€œAs long as special glasses are necessary, 3D is impossible.â€

Looks like Nintendo’s dabbling in 3D technology goes back much further than some of us may have ever imagined. And the Virtual Boy may have flopped in the market, but to Nintendo it represented a vital step in a new direction and could be construed as the spiritual precursor of the 3DS. How do you feel about these revelations? Do you think 3D on the GameCube or GBA would have been a viable, profitable, or enjoyable pursuit? Or is it more advantageous to package it in a brand new handheld that focuses entirely on 3D now that the cost of the technology has dropped?

NFC detailed for Wii U and 3DS. Dubbed amiibo 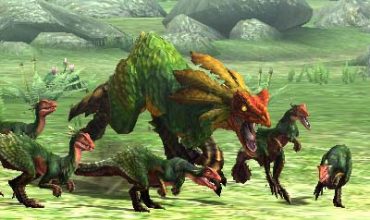 Review: Can a remake qualify as one of Nintendo’s best-ever releases? Yes!