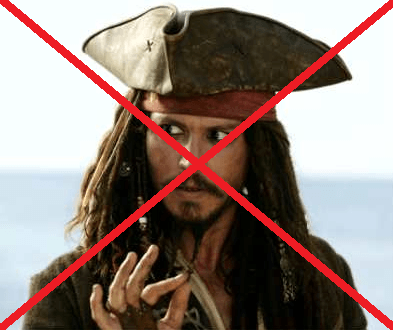 It seems like just yesterday when I was passing around copied floppy disks to all my friends at recess of Maniac Mansion. Even back then developers were plagued by rampant piracy that they attempted to curb, and I would get phone calls well into the night asking what the code for the door was that was located in the instructions manual. Today piracy hasnâ€™t gone anywhere, and in fact one could argue that with the advent of broadband internet connections, piracy is bigger and badder than ever.

I donâ€™t claim to be a saint when it comes to this subject. I have downloaded my share of music and games in my day, but this editorial on IGN written by Richard George really got me thinking about the state of piracy in the video game industry today and it is troubling indeed.

Over one million copies of Super Mario Galaxy 2 and Mario Sports Mix were downloaded last year according to TorrentFreak. Even more troubling is the fact that Xenoblade Chronicles was downloaded 950,000 times, with most of the downloads originating in North America. Itâ€™s easy to see why so many gamers on this side of the pond would take to downloading one of last yearâ€™s most sought after titles on Wii, we just didnâ€™t know when or if the game would be coming our way. In fact, many gamers took to drastic measures in an attempt to get the game they wanted to play because Nintendo of America went on record in saying the game wasnâ€™t happening. Eventually Nintendo made an about face, but the damage may have already been done.

By now, many gamers who may have wanted to play Xenoblade Chronicles have either torrented themselves a copy, or like myself have had a copy imported. Neither of these bode will for the future, because if not enough copies of Xenoblade sell when the game finally arrives this April, the powers that be at NoA may decide that it is the last game of its kind they are willing to take a chance on. How would you like to play a copy of The Last Story sometime this generation? Well if you are one of the million people who downloaded Xenoblade Chronicles last year, then that may never happen.

So what can we do? Well for starters vote with your wallets, there is still time to make amends. Even if you torrented the game, when April comes along give the developers at Monolith Soft a little support and give the game a purchase. If you care enough to modify your Wii, updating ISO after ISO just to play the newest, hottest games, then you should care enough to keep those games coming by spending a little money now and then.

Look. Iâ€™m not trying to condemn you if you happen to torrent a game or two. Some would even argue that to some extent, piracy leads to game sales; but for the sake of the future of our little white box and beyond, go out and buy Xenoblade when it lauches if you have the means. Your purchase will go a long way in the eyes of Nintendo, and could help to save Wii from a terrible 2012.

IBM working with Nintendo again for next console

What downloadable Wii game have you enjoyed most?

Nintentunes is here and ready to add some class to your weekend!