One of the first things I always ask when a person starts playing Skyrim is “which side of the civil war are you fighting for”?

The civil war in Skyrim has always interested me – it isn’t very impacting in regards to the overall plot – but there’s something about it that feels compelling to me, and I’m realizing that it mirrors our own American government fairly accurately at the moment.

A blonde, power-hungry xenophobe whose troops idolize him like a god

Ulfric Stormcloak is the leader of the Stormcloak rebellion, a group of Nords who are fighting to take back their country. Their belief is that the other races, led largely by the elves, have moved in, established a new government, and taken their rightful home away from them.

The Stormcloaks idolize Ulfric, to the point where he can do nothing wrong. They name their army after him, and keep the “lesser” races from entering their capital city, leaving them as dock working. The elves who are allowed in the city all live in slums, and they’re very mistrusting of non-nords. Even their battlecry, “Skyrim belongs to the Nords”, screams xenophobia. In short, they feel displaced in their own country and they want it back, even if it means treating other races as lesser. Nords First, if you will.

Ulfric is a dangerous leader, essentially a government of one, whose troops have committed heinous crimes in his name, and will continue to do so without question. Most Nords who side with Ulfric feel they are fighting for the right side, in the name of taking their country back to something they believe it used to be, before these foreigners moved in.

Who was really here first?

What the Stormcloaks won’t mention is that long before their people arrived in Skyrim, two other groups lived there – the Snow Elves and the Dwemmer (essentially dwarves). Their history caused some truly awful atrocities to occur, leaving the land mostly barren and empty for the Nords to claim, but it speaks to a very important question: Who really owns the land? The Nord settlers, or the native Elves?

A  government with no proper leadership

On the other side of things we have the Imperials, a large government that spreads out across several countries, essentially the Elder Scrolls’ equivalent of the Roman Empire. During the events of Skyrim, the government is plagued with inefficient leadership that fails to establish a strong presence. They treat the Nords as barbaric, and largely a burden to be carried by their more “civilized society”

The High-King of Skyrim, who was backed by the Imperials, was assassinated by Ulfric – this was the start of the civil war. His wife is currently considered the ruler of Skyrim by those who follow the Imperial government, but she’s young, inexperienced, and largely a figure-head. She is largely influenced by General Tullius, the leader of the Imperial Army in Skyrim.

What’s more, this government is under a firm partnership with the High Elf government called the Thalmor, which are equally xenophobic of non-elves (and even non-high elves in their own community). Anyone who isn’t a High-Elf is more or less a beast in their eyes, to be subjugated and controlled. As such, they actually support the war from both sides, as it weakens both governments and makes Skyrim too weak to challenge them. They officially back Imperials, but meddle in the affairs of both parties for their own political agenda. While the Imperial government doesn’t currently have the means to fight this group, they believe a solid control of Skyrim will be the key to finally liberating themselves from their so-called “allies”.

All of that leads to a power vacuum of sorts on the other side, a government organization that isn’t even sure who’s in charge, with very little overall direction.

You haven’t really experienced Skyrim until you’ve played as a non-human race. As someone who largely plays as an elf, I’m no stranger to hearing “Go back to your forests, little elf” from enemies and “Stay out of trouble, elf” from the local nord guards. It’s worse if you play as the reptilian Argonians or the cat-like Khajit – You’ll sometimes be referred to as a “belt” or get told “you’ll make a nice rug”. Classy, Nords. Really.

The way Skyrim sprinkles racism into it’s characters is brilliant, light as it is. While you will always have access to every area, you’ll arrive at certain cities to see your Argonian or Khajit brothers and sisters denied entry. Likewise, as part of their deal with the Thalmor, public worship of one of the nord’s gods (essentially Christ in this game) has been outlawed, which causes tension amoung the more religious Nord groups who feel they are being disparaged.

All of this leads to everyone feeling put down by everyone else, assuming everyone is the enemy. Of course, the beauty of Skyrim is that not everyone of one race or political side is the same, just like in real life. There are Nords who oppose the xenophobic practices of Ulfric Stormcloak, and High Elves who despise the Thalmor. There are orphaned children on both sides of the war, who know nothing of the government except that the opposing side killed their parents.

Just like how in real life, two people can get aloung who have strong conflicting views, the same is true in Skyrim. But the tension is strong, and you never know as you go from city to city what side of the war that location will fall under. You might go to a tavern and find they play the same war song, but instead of praising the Imperials, they sing about the glories of the Stormcloaks. Awkward…

If this isn’t starting to sound like real life, you aren’t paying attention

It amazes me how a game as old as Skyrim can mirror real life so closely. Walking down the street in modern American society can feel a lot like playing Skyrim. Everyone has their own history, and hangups, and beliefs, and our culture has become so warped and frankly scary these days.

To put things in Skyrim terms, you can be having a conversation with a longtime friend, and suddenly find out they support the Stormcloaks, rather than the Imperials. And suddenly everything’s different. You begin to question how they could possibly support someone life Ulfric Stormcloak, who stands for everything you stand against, and who had done things you don’t want to happen in Skyrim, your home.

Then the two of you have to decide: Can an Imperial and a Stormcloak still be friends? What beliefs are worth more than a longstanding friendship. And what can each of you let go for the sake of keeping that relationship alive?

Skyrim is, of course just an analogy in this case, and for all I know, you see the civil war entirely differently, as it relates to real life. That’s kind of the point – we all have our own little pieces of this much bigger picture, this collective zeitgeist of our culture that shapes who were are as a people, and what we want to stand for.

So tell me, which side of the civil war are you fighting for? 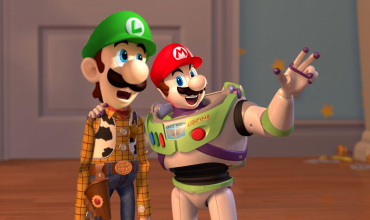 Bethesda: Skyrim on Wii U could happen