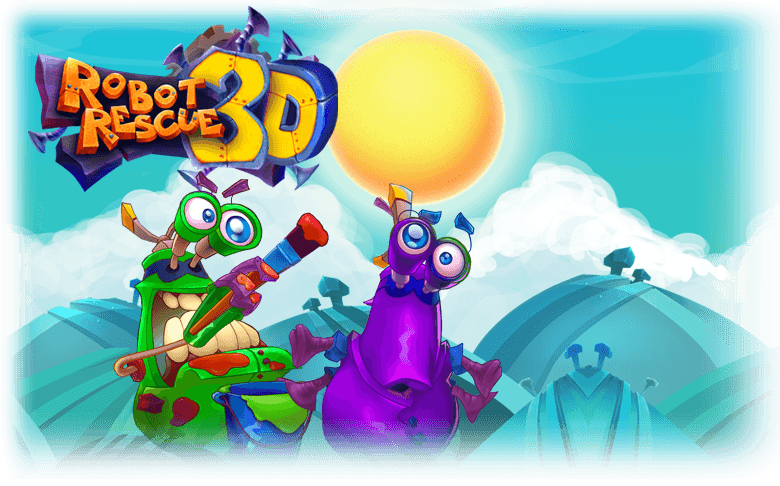 The folks over at Teyon games have once again given me the opportunity to present you with a review of one of their 3DS games.  This time, I am reviewing Robot Rescue 3D.

I started out playing the first and second games, because I had not played them before.  The first levels were predictably easy, and why wouldn’t tutorial stages.  However, as they progressed, so did the difficulty.  Your goal is to guide the robots to the doors to exit the levels.  There are many obstacles in the way, and in some areas you need to repaint your robot in order to progress past some of the barriers.  I loved the stages that required you to control multiple robots at one (At some points you can control up to 30 robots at once!).  The difficulty, although increasing, was manageable with some thought.  Many times, you need to try the stages out just to see where the trouble spots are before planning out your final paths.

Rescue Robot 3DS is quite a bit more difficult, in fact, the first level has destroyed me countless times.  For a puzzler, the difficulty level has definitely been turned up to 11!  However, despite the difficulty, I find the game to be a very fast paced and heart pumping puzzler.  Each level is unique and requires your full attention to traverse.  I also love that this game can be played for a few minutes, or a few hours, and still captivate the player.

If you are a fan of puzzle games, and are looking for the next big game, give Robot Rescue 3D a download and check it out!  In my opinion, it is the next big thing since Angry Birds!

Krakow, POLAND – The wacky robots from the Robot Rescue series are back with Teyon. The developer and publisher of the franchise today announces the upcoming release of Robot Rescue 3D, a Mega Pack on Nintendo 3DSTM with over 120 puzzles to solve. This quirky puzzler will be available in the Nintendo eShop for Nintendo 3DS™ from July 18 in the Americas and Europe for $2.99 and €2.99 respectively.

Robot Rescue 3D consists of all the levels from Robot Rescue and Robot Rescue 2 plus additional never before seen levels all transformed into 3D. Players venture through challenging and exciting levels, with the objective to rescue all the wacky robots trapped in each maze. The levels are made more complex with all the robots sharing linked controls, generating synchronized movements and preventing a simple escape plan. Also, you can repaint your robots by stepping on special tiles in order to change their color and to access new paths and passages. The only way to make it to the exit in one piece is to use logic and strategy to unravel the puzzle and guide the wacky robots to freedom!

Follow the link to watch the official trailer for Robot Rescue 3D – http://youtu.be/GG26v0yh3i4

For updates and information about Robot Rescue 3D, jump onto the official website – http://www.teyon.com/games/robot-rescue-3d/

Nintendo 3DS is a trademark of Nintendo. © 2011 Nintendo.