As one might expect from a game that’s just $1.99 on the Wii U eShop, Poker Dice Solitaire Future has a simple premise. The first in the Tabletop Gallery series from one-man development team RCMADIAX, the game has the player roll five dice to create Poker-style hands (2-pair, full house and the like) for a high score. The dice can be rolled up to three times, and the player can choose to hold any values he/she chooses with each roll. There are four chips available for each hand, though one of those chips must be discarded if a successful hand is not achieved after three rolls of the dice. Bonus points are awarded if special circumstances are reached, such as winning all four chips in a particular hand or winning at least one chip from each hand.

Okay, so the game is not as simple as it seems. Or is it? Poker Dice Solitaire Future is difficult to explain, though it makes perfect sense within minutes of actually playing it. The strategy and thought involved in play, though, make it surprisingly thrilling and rewarding (I’m not a gambler myself, but I can see why people are drawn to it *insert winking emoticon*).

The “Future” part of the game’s title really only reflects its graphics, which admittedly took a little time to grow on me. With this type of game, I hoped for the graphics to create a more traditional feel, but now the outer-space setting feels pretty good. The music is suitable, though like in RCMADIAX’s previous Wii U eShop game, BLOK DROP U, the one song which loops grows a little stale.

Poker Dice Solitaire Future is a solid gameplay experience in and of itself, and you won’t find anything else like it on the Wii U, but a couple of extra features would have increased the game’s replay value for me: though the game indicates when you’ve reached a new high score (and you can always share this screen to Miiverse), there is no option that shows a listing of local high scores. I would have loved to see the option of recording your initials along with your high scores, so that I could potentially compare scores with the other people in my household. Overall, I generally would have expected just a little more from Poker Dice Solitaire, but it is a great way to add some variety to your Wii U game collection and for just $1.99. I’m excited to see what’s next in the Tabletop Gallery series and what’s next from RCMADIAX beyond that. Poker Dice Solitaire Future is awarded:

3DS Netflix arrives and works great. Except for one thing…

Metroid-inspired platformer coming to the Wii U

Isaiah Triforce Johnson Already Waiting In Line For The Wii U! 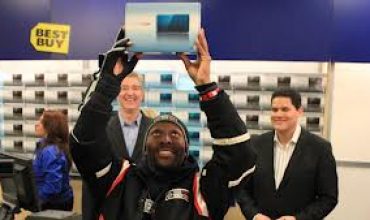