By the time Nintendo was ready to release there next console in 1990, you would be hard pressed to find a child in America that didn’t know the name Mario. When else can you remember a feature film released that was basically a giant commercial for a video game? Sorry Fred Savage, but you were basically a shill for Super Mario Bros. 3.

While the NES was still vastly outselling its competition, a new challenger was approaching, and he was fast. Nintendo did in essence have a Monopoly on the home console market with the NES, but many were ready for an upgrade.

Along comes a little company called Sega. Already prominent in the arcade industry, Sega’s first two entries into the console market were far from stellar. The SG-1000 had such poor sales it never released outside of Japan, and although the Sega Mark III/Master System was Nintendo’s only true competition, Sega was never really able to crawl out from behind Nintendo’s shadow.

When the Mega Drive released in Japan in 1988, many heads started to turn Sega’s way. Although it would take a few years for the system to gain significant momentum, Nintendo began to take notice.

As their dominance in the market began to slip, Nintendo veteran and designer of the original Famicom Masayuki Uemura began to design Nintendo’s next system. When the Super Famicom launched in Japan on November 21, 1990, it was an instant success. At launch, the available 300,000 units sold out within hours, and Nintendo would solidify its position atop the Japanese console market.

Although only two games were available at launch, the Nintendo faithful flocked to stores in droves, causing the Japanese government to ask video game companies to only release consoles on weekends.

When the Super Nintendo would launch in North America, astute gamers were already aware of Nintendo’s next console. It wouldn’t be until August 23, 1991 that the SNES would finally hit stateside, and with Sega’s own Genesis already on store shelves for two years, the NES was looking rather dated.

Bundled with Super Mario World, it wouldn’t take long for the system to sell out of its initial launch shipment. Games which utilized the console’s Mode 7 technology such as F-Zero and Pilotwings showed early that Nintendo’s console could do what Segadon’t.

Much of Nintendo’s success could be attributed to their ability to retain their key third-party developers such as Square, Capcom, and Konami. Even still, Sega managed to gain a large portion of the console market, eventually only trailing Nintendo in worldwide console sales by nine million units.

Because of the ability of Sega to compel developers to publish titles on the Genesis, Nintendo was forced to change their almost draconian control they had over titles released on their systems. On the NES, third-party developers could only release five titles per year, and those titles could not appear on another console for two years. In addition, Nintendo was the sole manufacturer and supplier of NES cartridges.

The SNES continued to stay relevant well after other companies began to release their own next generation consoles. In Japan the Super Famicom remained in production until September 25, 2003. This was because when designing the console, Masayuki Uemura was forward thinking enough to rather than include and expensive CPU that would quickly become obsolete, design the console so it was easy to allow cartridges to include their own CPU chip that could perform functions the main CPU could not. One such chip was the Super FX, famously used in Star Fox.

Although never released outside of Japan, Nintendo’s first online console was actually the Super Famicom with the help of the Satellaview. When connected to the bottom of the Super Famicom, the Satallaview could download gaming news and specially designed games. The games would be released in an almost television-like fashion, being released in installments over time.

Nintendo was able to continue its role sitting atop the console market, and it looked like no one could stop them. Little did they know that their fall from console grace would happen from within.

Join us again Friday as we dive headfirst into a whole new dimension as we continue our History of Nintendo feature.

Nintentunes: the best bleeps and bloops around 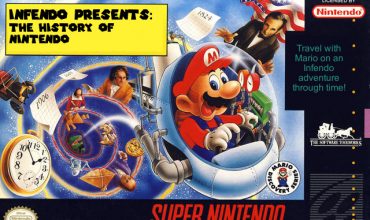